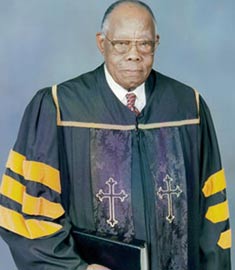 In nineteen hundred and sixty two, Reverend Robert L. Walker was appointed as pastor of the New Covenant United Holy Church, taking on a church that at most had four members.

Dr. Robert L. Walker was a man of God who stood tall in stature. He worked as a bricklayer for many years and, with God's help, became the foreman of many successful building projects throughout the Southeastern United States.

Elder Walker had a vision from God which instituted the building of a new edifice. This vision was declared to the congregation in 1965 and property was purchased in 1970. Construction of the new edifice began in 1970 and the completion of the edifice was in 1972. Many oppositions came forth during this time but Elder Walker continued to adhere to the instructions of the Holy Ghost. Faith then is evidence today. Because of the call of God on his life, Dr. Walker retired as foreman and came home to work at New Covenant.

In 1972, the church moved from a dilapidated building on Ringling Street, in the Hickstown section of Durham, NC, to a new church building located in the Braggtown section of Durham. Most of the new building was built with his own hands and with his own money. When the church held its first Sunday morning service in its new building, everything was completely paid for. The final service in the former building was held Sunday, April 1, 1972. Elder Walker preached the message "When God Get's Ready, You've Got to Move". The first service in the new sanctuary was held on Sunday, April 8, 1972. The Gospel Choir marched in singing "We've Come This Far By Faith". Pastor Walker shed tears of joy knowing that he had kept the faith and finished the task that God had given unto him. 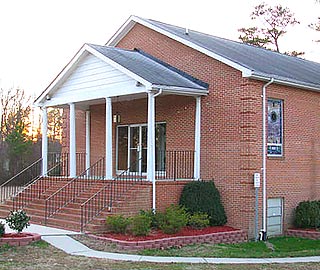 Dr. Walker continued to serve faithfully as Pastor of the church for 42 years, preaching the gospel of Jesus Christ and teaching the members to live by faith and love, to follow the leading of the Holy Spirit, and to live a life of praise unto God. Dr. Walker finished his race and went home to be with the Lord April 16, 2004. Because of his devoted work in the ministry and his love for children, the R.L. Walker Scholarship Fund was established in his memory.

Very dear to Dr. Walker's heart was his love for children. Before his appointment as Pastor of New Covenant, he was the president of the youth department at his home church. His ability to attract and minister to young people continued as he began to minister at New Covenant. Children of all ages were always a significant portion of the church membership and were often seen at the church where they were drawn to Dr. Walker.

He would feed them often, sometimes loading his truck with watermelons and bringing them to the church on Saturdays to give to the children after choir rehearsal. He always encouraged young people to serve God in their youth, to respect their parents and elders, and to do their very best in school. He loved to see young people succeed and do well academically. Although he knew education was important, Dr. Walker constantly reminded the youth of the 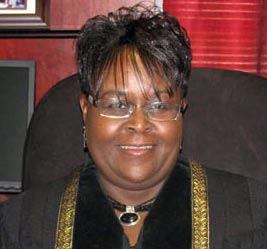 importance of putting God first in life. He often stressed that education without God did not guarantee success. Some of the youth impacted by Dr. Walker have gone on to become lawyers, doctors, police officers, as well as ministers of the gospel.

Elder Phyllis Ann Walker is the current Pastor of the New Covenant United Holy Church of Durham, NC Inc. . She was ordained in September 2004 by the United Holy Church of America, Southern District and replaced her husband as Pastor. She was married to Dr. Robert L. Walker for 19 years. They have one daughter, Brandy.

Elder Phyllis Walker is a 1975 graduate of North Carolina Central University. She graduated with a BS in Business Administration with a Financial Management Concentration. Prior to her appointment as Pastor, Elder Walker successfully instituted and taught the Basic Bible Studies for New and Growing Christians for thirty years. The NCUHC family continues to thrive spiritually and physically under her leadership as we minister to the total man: spirit, soul and body.